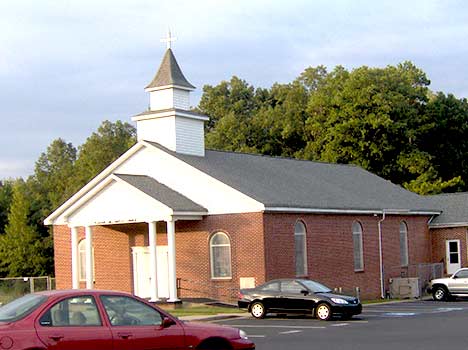 In the year of 1871, some two and one-half miles east of its present location, on the farm of Rob Pendleton, The Pleasant Hill Baptist Church was founded. A group of spiritual minded people whose names are not available, elected Rev. Stewart Oliver pastor of this church. Under his pastorate the church was moved to the area close by where the present church now stands.

The first two acres of land were a gift from Jerry and Mary Moore. This husband and wife each gave one acre. Several years later two additional acres were purchased from a Liberty Stock Dealer named J.J. Frettwell. These two acres cost the church $70. In the year of 1964, Wilton, Prue, and Walter Williamson, donated 1/4 acre. Pleasant Hill now owns 4 and 1/2 acres of land.

One the first two acres of land, still under Rev. S. Oliver's pastorate, the first services were held under some shade trees with wood slabs for benches.

Under the pastorate of the second pastor, Rev. Alex Walker, the first 30ft. by 40ft. depot-styled building was erected. Growth made it necessary for two expansions. The second building of the same order was 40ft. by 50ft., and the third was 50ft. by 60ft. The lumber for these buildings was cut by hand by men skilled in the craft of hewing. Lack of money forced this church people to use methods that are obsolete to the present church people. Rev. Walker's salary of fifty dollars per year was paid by assessing the men one dollar per year, women fifty cents, and children twenty-five cents payable by October of each year. To finance the Sunday School, each member brought an egg and gave it as an offering which was sold by the Sunday School to gain money. Rev. Walker remained on the same salary until the year of 1910. He was then raised to two hundred dollars per year, but died shortly after. He served thirty-five years or more.

Rev. Luther Miller was the third pastor. He served on a call basis which means that he was not officially elected as pastor of the church.

The fourth and next official pastor was Rev. John Walker from Greenwood, S.C. The approximate dates of his pastorate are Oct. 1912 to Oct. 1914. A church bell was purchased and a bell tower was built by carpenter Frank Turner during the pastorate of Rev. Walker. 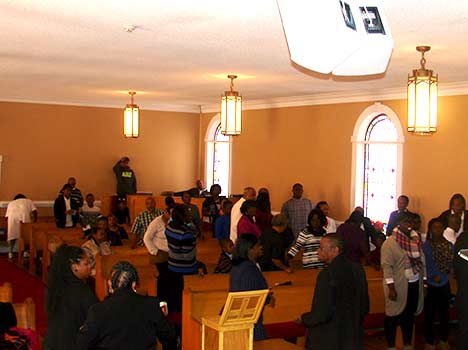 The fifth pastor of Pleasant Hill, Rev. J.B. Hancock, was elected in 1914. He served four years and was succeeded by Rev. H.M. Moore in the year of 1918. Under the pastorate of Rev. Moore, the fifty by sixty feet church building was remodeled at a cost of $1,000.00 plus labor. Rev. Moore served for an undetermined span after which the seventh pastor, Rev. L.C. Watkins was elected. The eighth pastor, Rev. L.T. Thompson, was the second to serve on a call basis. He served until the election of the ninth pastor, Rev. J.D. Hicks, who served from 1926 until his death in October 1961. Under his pastorate two rooms were added at a cost of $700.00. Carpenter was Elliot Jefferson. The building fund began which made it possible to build the first brick church under Rev. A.D. Hawks leadership.

Rev. Paul Drummond became Pleasant Hill's tenth pastor. He served less than a year and resigned. The Rev. A.D. Hawks was then elected pastor number eleven. Under his pastorate the first brick church was built by contractor Odis Davis. The money for this $20,000.00 edifice was borrowed from First Federal Savings and Loan of Anderson, S.C. The Board of Deacons who signed the note and became the borrowers were: Nathaniel Adams, Napolean Thompson, Lee Williams, Willie K. Rice, Erskine Hatten, and Claude Bozeman. The Sunday School made a contribution at this time worthy of mention. The organization bought and gave to the church chairs for each classroom. The superintendent at this time was Bro. Theodore Thompson, Sr.

The dedication of this brick structure was in February of 1965. During that week of services, we were blessed with a message by Rev. P.H. Carmichael, Rev. B.J. Cunningham, Rev. O.S. Scott, and Rev. J.C. Williams. Rev. A.D. Hawks pastured Pleasant Hill from 1962 to October 1967.

Pastor number twelve was Rev. T.T. Brewton. He was elected on November 30, 1967 and served until December 1974. Under his pastorate The Young Matrons and The Youth Choir were organized. The loan with First Federal was paid off, and the mortgage was burned in a service for that purpose. The Pleasant Hill Young Adult Choir gave the church a new piano, the first trustees were elected and they were the borrowers of $33,000.00 from Laurens Federal of Belton, S.C. which was used for additional work of adding to the church the following: kitchen, air conditioning, dining area, and converting from oil furnace to gas. The contractor was R.D. Walker. The names of the trustees are J.L. Davis, Lee Allen Perchell, James C. Rice, Lawrence W. Groves, James D. Groves, Charlie Henderson, Napolean Thompson, Sam Thompson, John H. Cullins, James N. Ligon, and L.C. Mitchell.

The thirteenth pastor was Rev. Otis Pettigrew. Under his pastorate, the Johnson family gave the church one hundred hymn books.

The fourteenth pastor was Rev. Marvin J. Peoples who was elected April 1, 1982. Some of his Christian fellowship endeavors were the Golden Age Committee, which provided services to persons sixty-two years and older. The Pulpit Aide, was in existence and gave pastoral assistance. Others include the Peoples Inspirational Choir, a van was purchased, NAACP Life Membership, a marker in memory of Willie K. Rice, a church library, honor roll recognition, copying machine, Brotherhood, Bible Study, and Children's Church.

It was interesting to note that very strong church doctrine prevailed for more than sixty years. Members that failed to live up to standards had to go before the board and make an acknowledgement or be dismissed from the church. In the last forty years, less and less of this was done. We note a trend of leaving these matters to the involved members and God.

The first choir leader was Tillman Clement. His choir sang God's praise from song books that contained only three notes: la, fa, and re. Later song books contained seven notes and the latest song books at Pleasant Hill have no shaped notes at all. The next choir leader, F.C. Clinkscales, was the first to have an organ which was purchased during his tenure. Other choir leaders were: Willie Ligon, John Thompson, Joe Rice, James N. Ligon, Sidney A. Adams, Francis Henderson, Lawrence W. Groves, and Dorothy Williford. 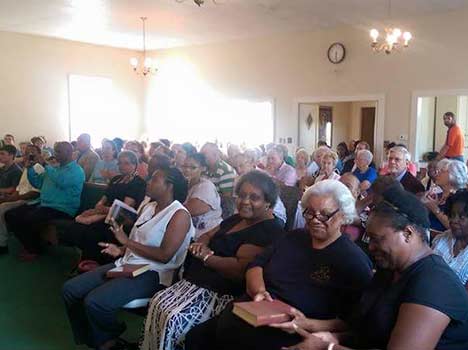 The was one choir until the year of 1964 when Bro. Lawrence Groves was granted permission to organize another choir. That choir was the Pleasant Hill Young Adults for nine years and is now the Pleasant Hill Gospel Choir. The Youth Choir was organized by Peggy Johnson in 1971. When she left Pleasant Hill, Francis Henderson and Dorothy Williford were elected to lead the Youth Choir. Due to the difference in the youth's ages, they were separated into two groups. The older ones remained The Youth Choir with Francis Henderson as leader, and the younger ones were named The Sunbeams with Dorothy Williford as leader.

The Woman's Missionary Society is one of the older organizations of the church. It serves the community by sharing God's Passion and taking part in promoting the Christian Cause. The first president was Mrs. Sinnie M. Fair, Mrs. Ethel Williams second, and Mrs. Amanda Clement was third and one who gave much of herself in support of the organization's goals. She served 30 years. The fourth was Mrs. Virdell Clinkscales Rice who gave much. The fifth was Mrs. Eliza Rice and Martha Groves was Vice.

A look at the changes and progress in some areas: In the early Pleasant Hill, deceased members were buried shortly after death; and the funeral was preached many months later. In the beginning members were giving eggs and $1.00 per year. The first pastor was paid $50.00 per year.

As proud as we are of our church, we are constantly praying to keep humble enough to be of service, that the Master may be able to point with pride to us as those who stayed in the fight for right and righteousness. And one by one we will answer the higher call from a righteous Father.